Charity of the Month: Unicorn Riot

Mostly I use my blog to talk about my work, conventions, and anime things, but from time to time I like to focus on bringing attention to causes and charities I care about, and I plan to write monthly about a charity that you can support along with the good work they’re doing.

This month I am donating $250 to Unicorn Riot, considering today being Juneteenth, and the important awareness work they are doing when it comes to raising awareness of causes and effects of racism and other social issues.

Unicorn Riot is a nonprofit media collective, which writes news stories focused on exposing the root causes of social, economic, and environmental issues. In their mission statement, they state, “Our work is dedicated to exposing root causes of dynamic social and environmental issues through amplifying stories and exploring sustainable alternatives in today’s globalized world.”

They have written about the Planned Attack in Tulsa 100 years ago, as well as ongoing events happening in Minnesota today.

You can donate to them alongside with me via their link on DonorBox.org, and I encourage you to make a matching $250 donation.

Unicorn Riot does not write exclusively about issues of racism, but they cover all kinds of important social topics that are often undermentioned by the modern media outlets controlled by the ultra wealthy.

The addition of Juneteeth as a federal holiday is a helpful reminder of America’s past, it is only one small step in a slow and ongoing process.

Bernie Sanders on Facebook said today, “As we celebrate Juneteenth, though we are some 156 years on from the end of slavery, we must recognize that its roots and its impact extend into current-day America. We must recommit today and every day to fighting for racial justice, for economic justice, for environmental justice, and for true justice in all its forms for Black Americans.” 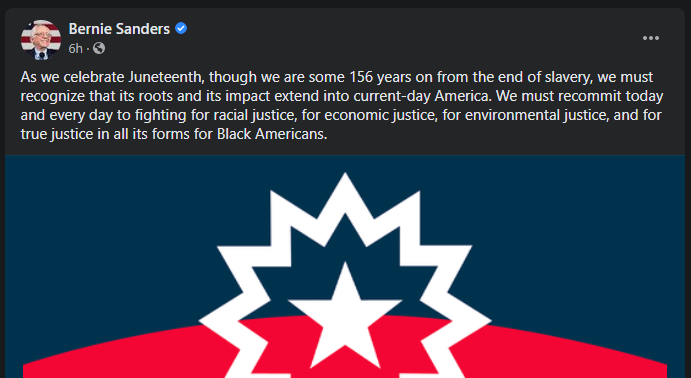 The name Juneteenth is a mix of the words June and nineteenth. The holiday can also be called Juneteenth Independence Day or Freedom Day.

Unfortunately racism is still strong with many people. Republican representative Ralph Norman of South Carolina spoke to Fox News Radio on Thursday explaining opposition to making Juneteenth a federal holiday, saying that the vote “was an easy no vote” and questioned if a holiday would now have to be established for Native Americans as well.

Well, yes, we should have one for Native Americans as well. And we still have much more to do.