No, I’m not talking about cats (especially when they like to knock things off of tables), but owls!

There’s no place in the world filled with more peace and tranquility for the owl lover, then an owl Cafe in Tokyo.

I am a person who loves owls. 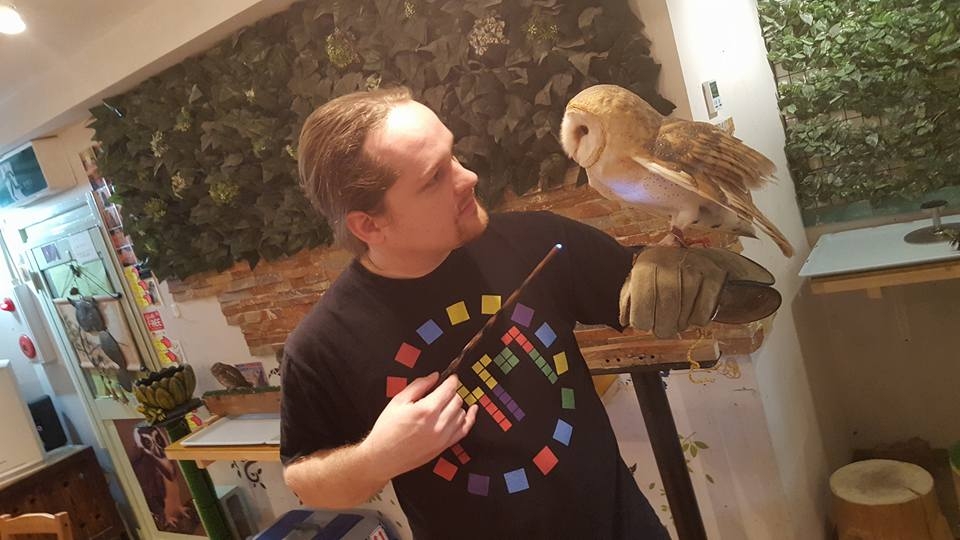 As one customer asked, “I want to know if I can put one on my head.”

Cafe Ho-Ho in Shinjuku’s Takadanobaba has been open for almost a year now, but both times we, the group who is in Japan, have stopped by we have enjoyed the run of the place. Likely, it could be because we are coming in before the working man gets off work, and this place keeps rather odd hours (1pm-7pm most days).

There are roughly anywhere between six and eight owls on display at any given time, and sometimes there’s a ridiculously huge owl, one who is quite large enough to bite your head off, and when it opens its peak it’s rather frightening.

As one person in our group said, “It doesn’t need to bite my head off, it just needs to stand on my head.”

There are a few very small owls, whom it would be difficult to be afraid of, and then a few medium-sized as well, who can be a little more skittish. The barn owls in particular are owls who seem not to like humans very much but the rest of them just nod quietly as you pet their feathers.

After petting one of the owls for a few hours, okay it was really only like 15 minutes, it decided we had matted it’s feathers down a bit too much, ruffling them gracefully and appearing to grow two times in width and sixty times in fluffyness. Who would have thought they could be so fluffy?

The owls are set against a backdrop of a thick forest with some plastic leaves, and there are owls who are very easy to interact with. As long as you, who is the customer, order something, the staff don’t seem to be judging too much how long you are interacting with the owls, it might be different during busier times, but once again we have the run of the place.

Who wouldn’t want to go?

Cafe HoHo in 高田馬場 is open from 1pm to 7pm most days, except for Tuesdays and Wednesdays when the owls get a rest. It’s easy to forget which days they are open only to wind up stopping by on a Tuesday afternoon and seeing the yellow chain across the entrance indicating they are not open that day. We also believe the owls get several holidays and other times off. We’re not sure if the owls are brought home every single night or not, or if they are instead allowed to rest at the cafe, but we have in at least one instance witnessed the cafe owner carrying an owl in a nice looking crate from the store.

Touching the owls properly is a very important thing to learn for any owl cafe customers. Many owl cafes in Tokyo are far more strict about how you may touch the owls. Some of them require you to only touch them lightly on the beak, or only touch them with one finger. This is also the way I recommend when it comes to dealing with strange or new owls – or even any other sort of strange or new pets or animals. But go to a petting zoo and you’ll soon learn that animals of all kinds like all kinds of petting, so when you become more familiar with an owl, you may be able to touch it with your full hand or palm. Some of the owls do also seem to enjoy a little bit of petting between the feathers, but we don’t recommend this unless a staff member shows you.

Sometimes you can even feed the owls in the owl cafe. The employees make little dishes of meat and entrails, which you can feet to the owls carefully with tweezers if you are a respectful customer who will be careful with the birds. However don’t expect to be able to do this, as it is pretty uncommon. Often the staff prefer to feed them themselves, or they have already fed them before you arrive.

One owl cafe had a few signs describing the living conditions of the owls, and explaining that they are often rotated and don’t have to spend too much time in the cafes overall. It also noted that many owls are silent predators, and they in many cases only hoot or only fly when they’re hunting or going after a specific prey. All the owls we met were very clean and were not missing feathers any places, so it was pretty clear they were loved and well taken care of.

Tokyo has quite a number of owl cafes, and some of them are easier to find than others.

Owl No Mori – Akihabara – This “Forest of Owl” is a very intimate owl cafe, decorated throughout as a forest. Admission is about $10-$12 USD, and this comes with one free drink. A few of the owls run around wildly.

Cafe Hoho – Takadanobaba – This place is a smaller cafe and a little bit out of the way. It doesn’t have the most owls, but they are friendly. Depending on the day they may be running around, or they may all be perched.

Ikefukuro Cafe – Ikebukuro – So, Ikebukuro is a great place because the name rhymes with “Owl” in Japanese, which is Fukuro. This cafe has 14 owls and can be more difficult to get into as you may need reservations.

Akiba Fukuro – Akihabara – This cafe has been around since 2014 and has sort of a theme park touristy vibe, which can make it a fun place to visit. 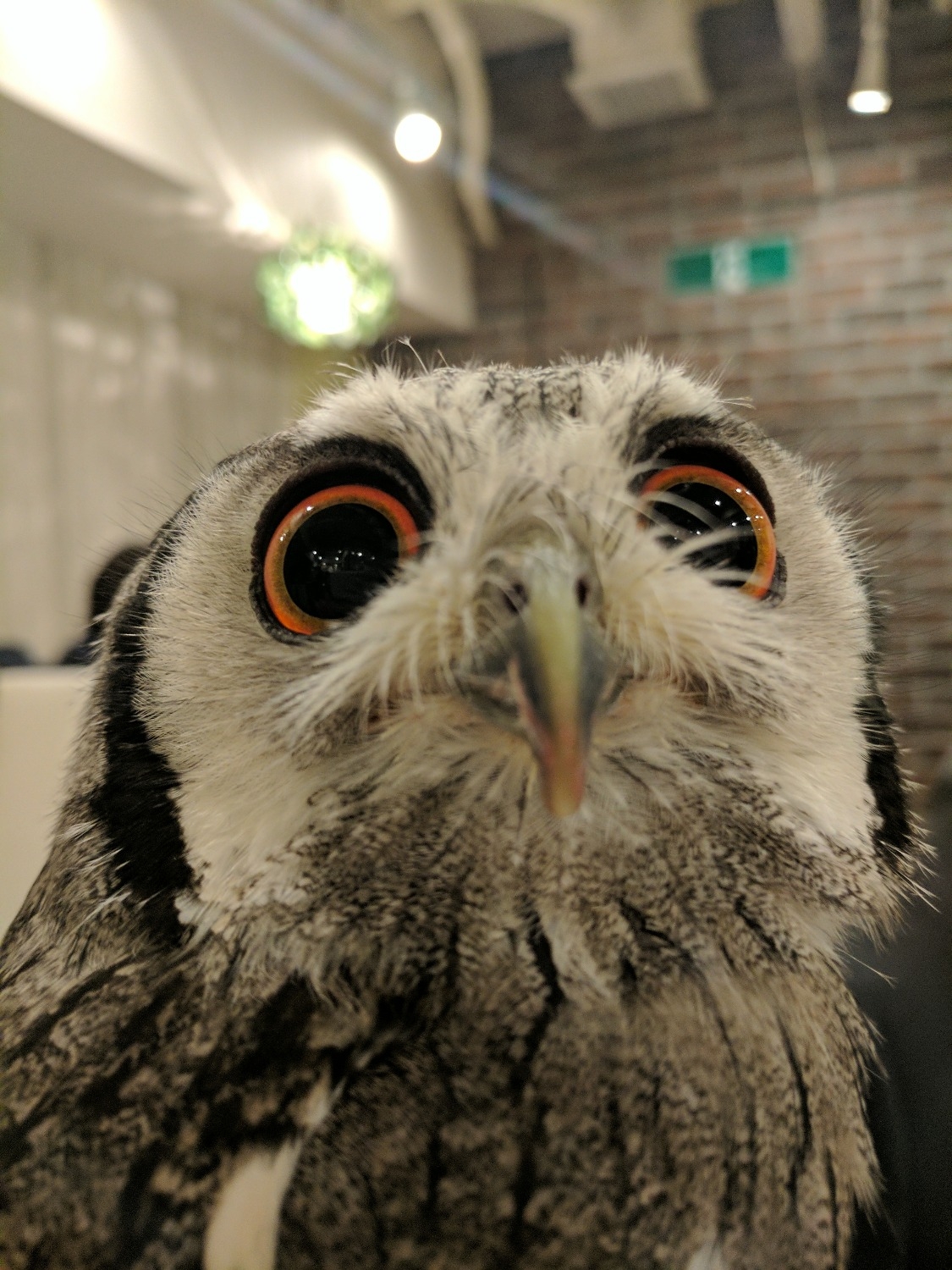 What if after you visit a Tokyo owl cafe and decide you want to own your own owl? Well, my personal recommendation would be not to – as an owl can be a very tricky pet to take care of. They require nice places to perch, darkness, and being nocturnal creatures they love to be awake during the nighttime. They may hoot at you all night and keep you awake, making it so that you will never be able to sleep again. Who likes to sleep? You probably do. Unless you work third shift – but then you’ll have an owl you never get to play with as you’ll be at work when they’re up.

Also it requires a lot of feeding and careful attention to their health. It can be hard to tell if a bird is unhealthy or being fed the right amount unless you have a lot of experience with birds. I might recommend getting a smaller, easier to take care of bird first, such as a parakeet. If you want to be exotic, it can be possible to own a parrot, but they also require a lot of love and attention as they are very smart birds.

In many places, it is not even possible nor accepted to own an owl. In many places in the United States, the birds are considered too exotic and you can’t own them, unless you have special licenses which can be very difficult and costly to obtain. These licenses are thankfully a good barrier against people who won’t take proper care of an owl, and if you have the time, love and dedication to get a license, you may be properly qualified to take care of an owl.

Owls are fantastic creatures. My friends call them sky kitties.