Ryan Kopf's Blog
May 02, 12 at 2:02am | Ryan Kopf
Education is an issue that I couldn't feel more strongly about, and every time I read either a positive or negative education story, it causes a surge in my veins. There is absolutely nothing more important than the education of our youngest generation, and yet our schools are rife with apathy, repetition, and destructive thinking. 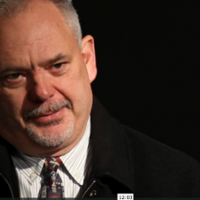 The principal in the story.
A real story, by the way.
I have witnessed many people in tough situations when I was younger, and it pains me when so many teachers and administrators are just "Doing it wrong."

I want to share with you the article I read, about a new discipline approach in an alternative school.

The story goes like this: Jim Sporleder is the principal of a school for alternative students - students that none of the other schools want. The toughest of the tough. It is a part of his job to discipline misbehaving kids.

And one day, predictably, a student drops the F-bomb at a teacher.

This time, instead of the usual punishment of an automatic suspension from school, Sporleder sits them down and asks a simple question.

He goes on to ask, "This doesn’t sound like you. What’s going on? You really looked stressed. On a scale of 1-10, where are you with your anger?"

As the original story says, the kid was ready. Ready, man! For an anger blast to his face... asking "How could you do that?" "What's wrong with you?" ...and for a nice big boot out of school. But he was NOT ready for kindness.

The steeled defenses melted like ice under a blowtorch.

"My dad’s an alcoholic. He’s promised me things my whole life and never keeps those promises." The waterfall of words that go deep into his home life, which is no piece of breeze, end with this sentence: "I shouldn’t have blown up at the teacher."

And then he goes back to the teacher and apologizes. Without prompting from the principal.

I hope it's obvious what we learn from this story. According to the NCCEV, as many as 10 million children per year are witnesses or victims of domestic violence, abuse, or alcoholism, like the kid in the story. It causes young people to be reactive, defensive, and instinctive.

The study this story links to points out one important fact - people in fight, flight, or freeze mode can not learn. It is up to our teachers and school administrators to break students free of these attitudes. It is up to us adults to show that kindness and compassion goes much further than anger and punishment.

I could never argue this is true in all cases, but it's certainly true for most. Some kids and adults are so desensitized from their traumatic experiences, that they can not change, but these people are exceedingly few and far between.

Back in high school, I said something inappropriate to another student, and a teacher overheard. I lost some privileges as a result, and can you guess how I felt? Offended. Hurt. Attacked. I felt unfairly punished, because I felt the things I said were only an end result of the things the other person had said to me. They were better at bullying without getting caught.

I didn't feel bad for what I said - I was still living under the childish "Eye-for-an-eye" rulebook. In my mind, they deserved the insult. I thought it was only fair. I didn't know that an eye-for-an-eye would make everyone blind (yes, a silly metaphor, I know).

I can imagine now how the situation could have played out differently. If my principal had taken this new approach.

"You know, it really hurts people when you say things like that."

I would have been floored.

I wasn't thinking of the other person as another human being on the same level as me. They were just someone that had been mean to me.

They could have continued with, "It's up to you to be the better person, even if they had said the same thing to you. We can't be everywhere, and we still have to take away these privileges because of it."

The outcome would have been the same, but I would have learned much more. I have never before so deeply understood that when a person is defensive and ready to fight, they can not learn. They can not grow. They can not concede nor eventually improve.

It's only when you break through these defenses with compassion, understanding, and kindness, can you every truly work together with someone.

I hope more school administrators see this story, and understand these ideas. They can be applied anywhere. I hope to use them more at conventions as well, to help build bridges rather than chip at barriers. If necessary, remind me, and yourself, of these principals regularly.

None of us will get anywhere if either side feels defensive. And only you know that.
Please login to post.