Don't steal from your friends

You, fellow congoer, wouldn’t slip five dollars out of a friend’s purse when they’re not looking. And if you would, you can just fuck right off.

The supermajority of people going to cons are the most awesome people in the world. What we might lack in conventional social grace we make up for in empathy and honesty. You attend conventions, pay for your admission, and go to have a good time 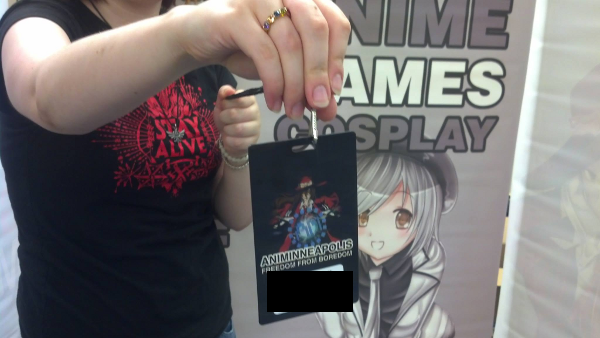 But there are bad apples out there. I will address them.

Attending a con without a badge is stealing from your friends.

There is no valid argument otherwise. Going to a big gathering of anime fans is about hanging out with your friends in cosplay.

UpcomingCons did a survey discovering the #1 reason for attending is to cosplay and hang out with friends. (#2 is visiting the vendors room.)

Most of the people who come, even 99%, pay for their own ticket and are here to have fun. Their admission fees pay the venue and for everything that the con has going on.

Those fees and the revenue from hotel rooms make the venue let 1,000 people in outlandish costumes crowd up their lobbies, drink their water, use their restrooms. Every person attending is a cost for the venue, however negligible.

The venue pays for cleaning staff based on the number of people there to clean lobby areas, pick up trash, refresh restrooms. They have to pay for enough staff to mind your security and handle your requests and questions.

The venue also has to make enough money from it’s hotel rooms and meeting rental fees to be profitable.

So every person attending chips in a part of that with their admission.

You can pay their normal prices ($200 a night) and hang out in the lobby until hotel staff decides that your costumes and general sillyness is not fitting in with their regular business clients, when you can then pay to rent some meeting space from them for a pretty reasonable price, maybe $1000 a day for a small room.

Anyone attending without a badge is getting the benefits that are paid for by the pool of people who do pay, without putting in their fair share. It’s like going to a potluck, not bringing anything, and not even apologizing for it.

Without that ticket, you don’t feel held responsible.

Not having a badge emboldens some people to act irresponsibly. They don’t have anything to lose by getting kicked out.

Having a badge gives you a sense of responsibility and inclusion in the community.

People without badges are more than twice as likely to be troublemakers. I remember attending a convention in Minnesota around 3-4 years ago, and passing a group of three drunk guys without badges who called my Alucard cosplay Carmen San Diego.

I have a wide sense of humor, so that’s funny. The first time. Not the eleventh. If it were intended just to be funny one-time, that would be okay. But they did the same sort of thing to every person who walked by. At that point, it wasn’t funny, it was mean-spirited. I’ve seen a lot of people who slave away on their costumes degraded by calling them names, other characters, things that are not relevant. It sucks and is not cool.

I have countless examples. Drunk guy with no badge stalking underage girls. Drunk guy with no badge running through the halls yelling “faggot.” Underage girl drinking in a room party without a badge. Room party hosts without badges giving out alcohol without checking IDs. I could go on. Because of my experience, I won’t let people without badges come anywhere near my events.

It’s stupid to sneak in.

We have documented logs of people talking about sneaking in. If you’re going to steal, it’s moronic to talk about it on the internet. 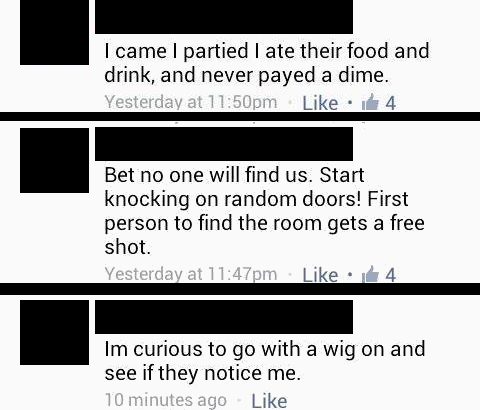 We find these people and go after them. I will be the bad guy if it keeps people from stealing from my friends.

Most people in the anime community don’t like drama and they don’t like seeing people talk about stealing from the events they attend. They will share it with the convention because they care about the environment their convention fosters.

You don’t have to steal from the pot.

For the people who legitimately can not afford admission, there are multiple ways to attend for free. Nearly every convention in the Midwest has a pretty open staffing and volunteering policy, with free admission for so many hours. Often this even comes with benefits, like free food. At my conventions there is never not enough pizza (unless you wait more than an hour, after that we have to throw it away for food safety reasons).

You can also find vendors looking for help who will pay you, house you, and feed you in exchange for working for them for the weekend.

We go a step even further than any other convention.

I grew up in subsidized housing next to a YMCA. That’s about one level better than living in a trailer park. Some of us grow up poor, and while it sucks it’s not our fault.

So I designed a program giving disadvantaged, underserved, and poor people (usually under 18 or in school) free admission. All you need is to have a nonprofit charity that specializes in disadvantaged youth contact us with verification of your status or membership with them, and we’ll handle the rest. This can be a youth shelter, youth center, or educational organization – we’ve worked with all of them to get free admission for underprivileged young people.

We will kick you out.

Badasses who try to attend without a badge will get kicked out. Sometimes we will send banned people a message in advance letting them know not to attend.

All it takes is one warning for a person to be arrested for trespassing.

But someone told me differently!

Well they are wrong. Anything I’m saying here is true because I’ve been there. I’ve had people leave in a police car for sneaking in, with or without giving them a warning.

If I give a police officer a copy of a letter you received telling you not to be somewhere, that’s all the officer needs to make the decision to have you arrested.

A hotel or convention center is a public space only for so long as it is being rented. And being a public space comes with certain responsibilities: respecting the ADA, non-discrimination, etc. It does not mean that you have to allow just anyone to be there.

If you brag about sneaking in and we have told you not to, our venues will cooperate fully in kicking you out. If you’re willing to break one law, they’re not interested in giving you the chance to break another like underage drinking or contributing.

If there are people here who will kill the atmosphere for everyone else, I will be the bad guy, no problem.

If you’re going to sneak in, here’s how to do it.

Not buying a badge hurts your friends and fellow attendees. If you don’t care about them, then I will remove you from my events because you are an asshole.